The broken pattern in rabbits

Taken from the rex rabbits USA site.   "Brokens generally have a blanket pattern (most common), a butterfly pattern (2nd most common), or an open pattern.  The blanket pattern is the heaviest pattern with a wide blanket of color over the back.  The butterfly pattern is lighter than the blanket but the color connects the side markings  with the spine marking generally somewhere in the middle of the spine marking.  An open pattern is a broken with a spine marking where the color patches of both side markings are separate from (do not touch) the spine marking.  Dalmatians DO NOT HAVE spine markings, and they ARE NOT CHARLIES.  Charlies are brokens where both parents are broken and they carry 2 broken genes and typically have less than ten percent of color." 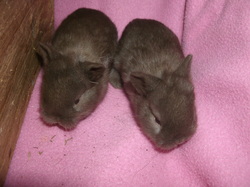 American Polish Rabbit Club. The Polish is one of the smaller domestic rabbit breeds, having a maximum weight allowance of 3 ½ lbs. and an ideal weight of 2 ½ lbs. They are popular rabbits for show and exhibition. Polish first made their way to the United States around 1912. Breeders have come a long way since then, in improving the type of the original imported animals. Large, bold, expressive eyes are a distinctive feature of the breed.